Data and Analytics in the Cloud is a Reality Today

Our recently completed benchmark research on data and analytics in the cloud shows that analytics deployed in cloud-based systems is gaining widespread adoption. Almost half (48%) of

Given the top barrier of perceived data security issues, it is not surprising the research finds that the largest percentage of organizations (66%) use a private cloud, which by its nature ostensibly is more secure, to deploy analytics; fewer use a public cloud (38%) or a hybrid cloud (30%), although many use more than one type today. We know from tracking analytics and business intelligence software providers that operate in the public cloud that this is changing quite rapidly. Comparing 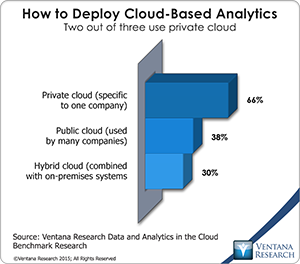 deployment by industry sector, the research analysis shows that private and hybrid clouds are more prevalent in the regulated areas of finance, insurance and real estate and government than in services and manufacturing. The research suggests that private and hybrid cloud deployments are used more often for analytics where data privacy is a concern.

Private and hybrid cloud implementations of data and analytics often coincide with large data integration efforts, which are necessary at some point to benefit from such deployments. Those who said that integration is very important also said more often than those giving it less importance that cloud-based analytics helps their customers, partners and employees in an array of ways, including improved presentation of data and analytics (62% vs. 43% of those who said integration is important or somewhat important), gaining access to many different data sources (57% vs. 49%) and improved data quality and data management (59% vs. 53%). We note that the focus on data integration efforts correlates more with private and hybrid cloud approaches than with public cloud approaches, thus the benefits cannot be directly assigned to the various cloud approaches nor the integration efforts.

Another key insight from the research is that data and analytics often are considered in conjunction with mobile and collaboration initiatives which have different priorities for business than IT or in consumer markets. Nine out of 10 organizations said they use or intend to use collaboration technology to support their cloud-based data and analytics, and 83 percent said they need to support data access and analytics on mobile devices. Two-thirds said they support both tablets and smartphones and multiple mobile operating systems, the most important of which are Apple iOS (ranked first by 60%), Google Android (ranked first by 26%) and Microsoft Windows Mobile (ranked first by 13%). We note that Microsoft has a higher percentage of importance here than its reported market share (approximately 2.5%) would suggest. Similarly, Google Android has greater penetration than Apple in the consumer market (51% vs. 41%). We expect that the influence of mobile operating systems related to data and analytics in the cloud will continue to evolve and be impacted by upcoming corporate technology refreshment cycles, the consolidation of PCs and mobile devices, and the “bring your own device” (BYOD) trend.

The research finds that usability (63%) and reliability (57%) are 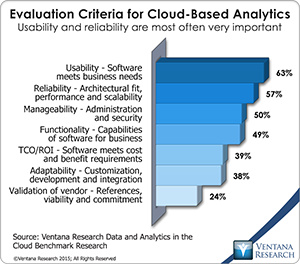 the top technology buying criteria, which is consistent with our business technology innovation research conducted last year. What has changed is that manageability is cited as very important as often as functionality, by approximately half of respondents, a stronger showing than in our previous research.  We think it likely that manageability is gaining prominence as cloud providers and organizations sort out issues in who manages deployments along with usage and licensing, along with who actually owns your data in the cloud which my colleague Robert Kugel has discussed.