ADP recently held its annual analyst day in the company’s new innovation center in the Chelsea district of Manhattan. The location emphasized what ADP wanted to get across to the analyst community at the event: that it intends to become a significant vendor of human capital management (HCM) software based in the cloud. ADP hopes to broaden its business from being largely an outsourcing vendor of payroll and related services (such as for auto dealers) to one that provides software for a range of HCM activities.

Carlos Rodriguez, ADP’s president and CEO, discussed several steps the company has taken in the last year to focus solely on HCM. One of the most notable was the spinoff of the Dealer Services business, which generates more than $1 billion in revenue annually, into a separate publicly traded company. Giving up a business that generates such a significant revenue stream indicates management’s determination to focus on its HCM cloud business. In addition, Rodriguez positioned both ADP’s 2014 revenue growth of $1.4 billion and changes it made in customer hosting as indicators of success in transitioning to being a cloud HCM vendor. And while the overall number of customers ADP claims to have moved to the cloud from 2009 to the present is impressive (450,000), a large percentage of them still appear to be using ADP’s established payroll, HR and workforce management products rather than adopting its other talent management offerings. For example, ADP Vantage, the integrated HCM suite for large enterprises, is presently deployed by only 155 customers. 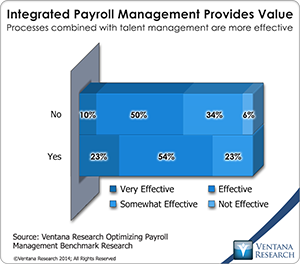 Nevertheless, throughout the day ADP demonstrated several advances in its current product releases and revealed a roadmap for the future of HCM. This year it has focused on improving usability of the applications, increasing its global reach both directly and through partners, addressing the needs of customers to comply with the Affordable Care Act (ACA) and adding next-generation capabilities to the HCM applications. Our benchmark research on optimizing payroll management shows that organizations that integrate payroll and talent management make their HCM processes more effective, and we observe the market overall moving toward integrated suites.

Release of ADP Health Compliance for addressing the Affordable Care Act is a significant advance. ADP executives and one customer present at the event asserted that it is drawing attention to the rest of the company’s products. As yet, however, our benchmark research on governance, risk and compliance (GRC) shows that fewer than one in seven (14%) companies manage compliance-related documentation with a dedicated application; most use email to execute such processes. We recommend automating complex compliance requirements to avoid risk and potential penalties.

ADP Health Compliance helps companies comply with the Employer Shared Responsibility provisions of the ACA by tracking and automating the measurement, documentation and reporting of these provisions. Used with other ADP HCM applications, it helps determine the number of employees eligible to be covered, assesses health plan affordability, automates reporting of required IRS forms and provides a dashboard to track related facts about each employee.

ADP also previewed the ADP Developer Community, which will be formally launched at the HR Technology Conference in October. The site is aimed at expanding the number of ADP partners that are independent software vendors (ISVs) and broadening the functionality of its HCM application ecosystem. The first release will offer to developers a library of prebuilt APIs that ADP has used to develop several of its own newest applications. While several other HCM vendors have also announced partner marketplaces this year, ADP’s initiative may be helped by its marketing approach with ADP Streamline, which offers international payroll and HR services through a network of ADP’s managed partners. Perhaps the company could use the developer community to expand the talent management capabilities of Streamline to compete more effectively in the global market.

As I mentioned above, ADP is focused on improving the user experience across all its applications. Demonstrations suggest that its new user interface is a definite improvement on those found in older versions of ADP applications. It is application screens are less cluttered, easier to understand and in certain places more intelligent. For example, the new compensation application can show employees how to take advantage of unused compensation or plan better career paths for themselves. An early version of this new user experience has been released in ADP’s online pay statement for customers’ employees.

Finally ADP discussed several next-generation capabilities now available or to be released over the next year. One of the most noteworthy is the ADP Mobile Solutions, currently used by 3 million users.  Available on both tablets and smartphones, a single mobile application provides 15 functions. 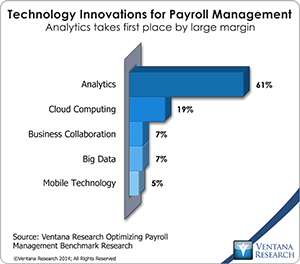 Don Weinstein, ADP’s vice president of product management, said that next year the company will focus on analytics and big data. Our payroll management research shows that by far the technology innovation most users (61%) want is analytics. ADP’s improvements in payroll management are focused in three areas. First, benchmarking, scheduled for release in the first half of 2015, will provide benchmark data to several applications in ADP’s human capital management suite, including fine-grained market data (such as employee turnover rates in casual dining restaurants in southeastern states).  If ADP can deliver on these promises, it should have a strong integrated benchmarking offering.

The second focus of ADP analytics is to provide a set of standard adaptors to integrate third-party information from common sources. This capability is essential for HCM analytics today, and several vendors already offer it in their products. Third, ADP will add predictive capabilities to its analytics. Similar to the predictive analytics available from vendors such as Oracle, Ultimate and Evolve, this functionality will use big data tools to provide packaged predictive models to help management and HR professionals address key issues such as employee retention and best fit for hiring. ADP customers that are smaller companies may find this an affordable way to acquire easy-to-use predictive capabilities.

ADP has demonstrated a commitment to shift its business focus to integrated human capital management. However, such change for a large, established and profitable company typically demands significant effort, as it requires changing the culture of the organization while continuing to support legacy customers whose profits fund the future direction of the company. But ADP’s product roadmap and upcoming innovations are moving the company in the right direction. Current ADP customers should find the new products a compelling reason to stay with ADP, and new ones should examine what it will now offer.