The Dynamic Culture and Swedish History Behind QlikView

I recently returned from Sweden, where QlikTech International hosted its annual analyst “unsummit.” Much of the information I was exposed to was under NDA, so I cannot talk about it here. What I can discuss, and what in many ways may be more interesting and more important, is the company’s focus on culture and philosophy.

Arguably, culture and company philosophy can provide a company competitive advantage by providing its employees, customer and partners a vision and a sense of engagement with the product and the company itself. Engagement and software usability have become important topics as companies such as Tableau and QlikTech have brought user-friendly, visual and iterative analysis to software that has heretofore been the domain of a few tool-oriented analysts. As such tools continue to gain traction in the organization I anticipate that these discussions around culture, engagement and the consumer-oriented idea of brand intimacy will become more important. In particular, I see two trends driving this: the consumerization of business technologies, which I discussed in a recent blog post, and demographic workforce shifts, which my colleague Robert Kugel discussed.

Bjork used this story as a jumping-off point to discuss the cultural backbone of the company, which is its Swedish heritage.  Sweden, he suggested, is interesting in two ways. The first is its design principles of simplicity and sophistication. The second is the consensus decision-making models in which its population engages.

Simplicity and sophistication are readily evident in Swedish architecture, and furniture. QlikTech and its user base make a strong argument that this is the underpinning of its software as well. (Interestingly, two of the new breed of BI software vendors were born and grew up in Sweden – Spotfire in the north and QlikTech in the south.) QlikTech uses a simple but powerful color-oriented approach to help users understand data.  Values in a data set can be highlighted in green, linked values are white, and excluded values are gray. This approach provides users an exploratory environment in which to iterate and visualize data. This approach was inspired by spreadsheet environments, where color coding is often used for analysis and alerting on differentiated variables. While QlikTech has advanced significantly from its spreadsheet roots, the color design principles remain intact and usability remains a key tenet of its strategy.

Perhaps the more interesting cultural aspect of Sweden is its societal and political culture. It is a democracy with a measure of shared responsibility in government and society that isn’t really found in the United States. The US is much more aligned with Teddy Roosevelt’s idea of “rugged individualism” and of the self-made men. In business, this American mindset tends to create a chain-of-command culture in which decision-making is pushed up the organizational pyramid, and once a decision is made, it is then disseminated through the organization. European business, and Swedish organizations, it can be argued are less hierarchical in nature.

This discussion of Sweden and its culture naturally flows into how business intelligence is becoming more collaborative by nature and how decisions are being pushed down through the organization. It also brings to light the different philosophies of locking down data and controlling data versus the ideas of openness and information sharing. As our benchmark study around next-generation business intelligence shows, these are key points for the future of business intelligence. As cultures become more open with mobility and collaboration, and decisions are moved down through organizations, employees become more empowered. 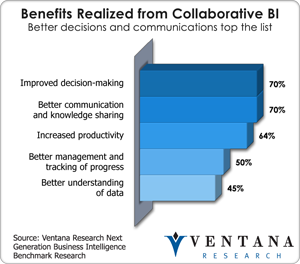 The entire premise, however, revolves around openness toward information sharing and a balance of controls within the organization. The idea of democratizing analytics makes a lot of sense, though democratization pushed to the extreme leads to anarchy. Much like Sweden, QlikTech intends to walk that fine line inspired by democratic ideals and consensus governance in its quest to bring analytics to the organizational masses. At the end of the day this may just may be the secret sauce the appeals to the millennial generation and beyond.