Working Across the Aisle in Analytics: Involving IT and LOB

For years, maybe decades, we have heard about the struggles between IT and line-of-business functions. In this perspective, we will look at some of the data from our Analytics and Data Benchmark Research about the roles of IT and line-of-business teams in analytics and data processes. We will also look at some of the disconnects between these two groups. And, by looking at how organizations are operating today and the results they are achieving, we can discern some of the best practices for improving the outcomes of analytics and data processes. 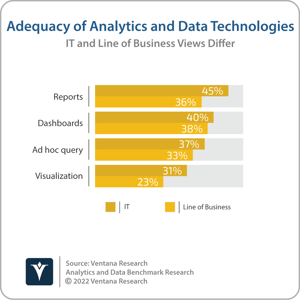 Let’s start with some of the disconnects. The IT function generally has a slightly rosier picture of the state of analytics technologies than the line-of-business function. For example, 45% of IT participants responded that their reporting technology was completely adequate while only 36% of line-of-business participants did. Similarly, 31% of IT reported that its interactive visualization technology was completely adequate while only 23% of line of business did. IT also had a slightly better opinion of the dashboard and ad hoc query technologies. The same is true for most of the data technologies, with data preparation and data integration showing some of the biggest differences of opinion. 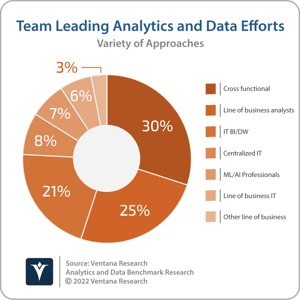 Let’s turn our attention to the roles of each of these functions in analytics and data processes. There are a wide variety of ways in which organizations assign responsibility for designing and deploying analytics and data. The most common is to a cross-functional team which occurs in 3 in ten organizations. In one-quarter of organizations, line-of-business analysts lead the effort, and in 1 in 5 organizations (21%), a team of business intelligence and data warehousing (BI/DW) specialists from within IT leads the effort.

In most cases, the participants in our research prepared analytics and data for others or architected solutions for others. Only 3 in ten were in a line-of-business function and prepared their own analyses. We can’t necessarily conclude that most organizations prepare their analytics this way but coupled with the fact that analytics are still not used by the majority of the workforce in three-quarters (76%) of organizations, it seems like a reasonable assumption. 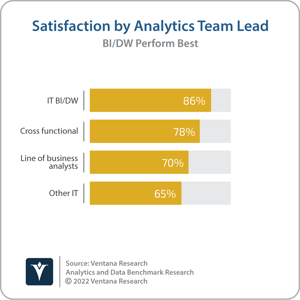 As we look at which efforts, by whom, are correlated with success, it appears that the more involved BI/DW specialist teams are, the more successful the outcomes. Further, it appears that cross-functional teams offer the next best results. Whereas efforts led by line-of-business analysts and other IT functions have less successful outcomes. Two of the measures we look at as broad indicators of success are satisfaction with, and confidence in, analytics. When BI/DW teams lead analytics and data design and deployment, their organizations report 86% satisfaction rates. Analytics efforts led by cross-functional teams report the next highest rates of satisfaction at 78%, followed by line-of-business analysts at 70% and other IT functions at 60%. We see similar results in the confidence organizations report about their ability to analyze data.

As you consider best practices for designing and deploying analytics, don’t undervalue the role that IT can play. As I have written previously, analytics need to become much easier to use. Until they do, having technically trained and knowledgeable resources involved in analytics and data efforts appears to be a common thread among those organizations that are achieving the most success. In particular, if you don’t already have a BI/DW center of excellence or competency center, you should consider establishing one. At a minimum, you should consider a cross-functional team to lead analytics and data efforts to ensure your organization has the knowledge it needs to succeed.

Sisense is Sensible for Embedded Analytics and BI

Information Requirements Across the Organization
eBook