Breaking into the database market as a new vendor is easier said than done given the dominance of the sector by established database and data management giants, as well as the cloud computing providers. We recently described the emergence of a new breed of distributed SQL database providers with products designed to address hybrid and multi-cloud data processing. These databases are architecturally and functionally differentiated from both the traditional relational incumbents (in terms of global scalability) and the NoSQL providers (in terms of the relational model and transactional consistency). Having differentiated functionality is the bare minimum a new database vendor needs to make itself known in a such a crowded market, however. 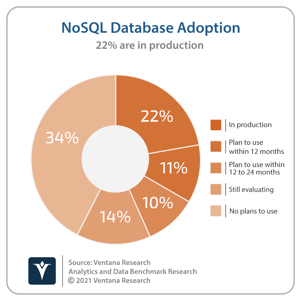 The database landscape is littered with the gravestones of innovative upstarts that failed to establish themselves as serious contenders to the incumbent providers. That is not to say it cannot be done. During the last decade, various NoSQL non-relational database providers have succeeded in gaining enough momentum to gain a foothold in the market. Almost one-quarter (22%) of respondents to Ventana Research’s Analytics and Data Benchmark Research are using NoSQL databases in production today. 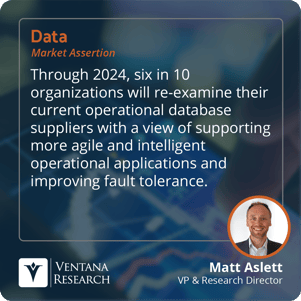 The NoSQL database vendors succeeded in gaining traction thanks to a combination of differentiated technology, evolving architectural requirements, and harnessing developer enthusiasm for new approaches. The new breed of distributed SQL database vendors should know that while differentiation can be enough to open the doors at early adopter enterprises, driving mainstream adoption will also rely on generating sufficient momentum with developers. They should also be aware that now is the time to be winning over the hearts and minds of developers who are thinking about their next-generation enterprise application requirements. We assert that through 2024, six in 10 organizations will re-examine their current operational database suppliers with a view of supporting more agile and intelligent operational applications and improving fault tolerance.

This underscores the importance of the recent release of Cockroach Labs’ CockroachDB Serverless managed database service. Cockroach Labs was founded in 2015 by former Google engineers with a mission to bring the advantages of distributed data processing enjoyed by hyperscalers to the masses. In particular, the company’s founders recognized that traditional databases were not designed to provide the elastic scalability, global availability and resilience that cloud computing delivers at an infrastructure level. CockroachDB was designed to provide a combination of transactional consistency and support for standard SQL, with elastic scalability, multi-region and multi-cloud deployment, and high levels of fault tolerance and availability.

The company has several hundred enterprise-class customers using either its original CockroachDB Self-Hosted offering or the CockroachDB Dedicated managed cloud service, which was launched in 2018. The bulk of the company’s early customers were technically advanced early adopters capable of self-hosting and managing the distributed SQL database themselves (including eBay and Bose, as well as Comcast, DoorDash, and SpaceX). However, Cockroach Labs is aware that in order to drive more mainstream adoption it needs to ensure that the database is easy to use and easy to adopt. The CockroachDB Dedicated managed service removes the complexities of infrastructure and software management requirements. However, switching to a geo-distributed database requires not just an architectural change but also a change of mindset by the customer, as well as related time to fully understand what is now possible, and develop applications to take full advantage of a geo-distributed data architecture.

Engaging with developers is the primary driver behind the development and beta launch of CockroachDB Serverless, a managed service offering that alleviates not just the complexities of infrastructure and software management but also database configuration and capacity planning. Developers do not need to predict the number of database nodes required for any application. They simply select their cloud provider of choice (AWS or Google Cloud), as well as their preferred region, and set a spend limit. CockroachDB Serverless will then automatically scale to meet processing demand up to the spend limit and Cockroach Labs takes care of the rest, including daily backups and restoration.

CockroachDB Serverless is free up to 5GB of data and 250 million “request units” per month (based on the estimated compute and IOPs consumed by each query) and developers do not need a credit card to get started, a GitHub account will suffice. Once users surpass the free tier thresholds, CockroachDB Serverless is priced at $1 per additional GB of storage and $1 per additional 10 million request units. Since CockroachDB is designed to be compatible with PostgreSQL, developers will find that they can use many of their familiar tools, drivers and frameworks from the PostgreSQL ecosystem. While the offering is available to individuals and companies of any size, Cockroach Labs predicts that it will initially be attractive to organizations with developers looking to learn CockroachDB as well as those conducting trials and deploying small projects.

Serverless databases are an emerging subset of the database software category and many businesses will need to experiment with how and when to use them versus more conventional, self-managed, on-premises deployments and dedicated cloud services. As noted, globally distributed relational databases are also new, and most businesses are yet to begin experimenting with the potential use cases, let alone developing applications that exploit the functionality available. Given the pace of business and platform transformation, however, it is incumbent on enterprises to consider new approaches to data management if they are to avoid being left behind by competitors that are adopting both platforms and processes to address new application requirements.

In the long term, Cockroach Labs will need to make the case for serverless databases beyond development, trials and small projects, but in the meantime, I recommend that enterprises contemplating potential use cases for geo-distributed databases evaluate CockroachDB Serverless when considering their options.

The Arguments For, and Against, In-Database Machine Learning