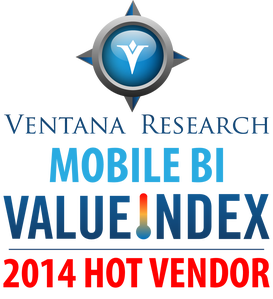 Earlier this year, Roambi announced a partnership with Box, which offers cloud-based data storage and file sharing. More recently it began to catch up with the market by announcing support for the Android mobile operating system. Roambi has focused on the mobile BI market from its inception, first by building on the Apple iPhone’s small screen and then progressing to support the majority of mobile devices in corporations today.

The Box partnership, announced in March, enables joint Box and Roambi customers to visualize and interact with data stored on the Box file sharing system. Specifically, users are able to sync Roambi Analytics, the company’s visualization engine, and Roambi Flow, its storyboarding capability, with Box. The integration allows fast importation of Box source files and the ability to create and share interactive reports through Roambi Analytics and to create digital magazines and content through Roambi Flow. Data can be automatically refreshed in real time via Box Sync.

This partnership serves both companies since the coupled service provide users with expanded capabilities and little overlap. Box’s rapid growth is being driven by its ease of use, open platform and cloud approach to file sharing. Thisis a natural platform for Roambi to build on and expand its customer base. For Box, Roambi’s dynamic visualization and a collaboration capabilities address its business customers’ needs and increase its market opportunities. In our benchmark research on information optimization 83 percent of organizations said it is important to have components that provide interactive capabilities to support presentation of information.

Roambi also works with other application vendors in the CRM and ERP market to integrate their applications. The same research shows that CRM (for 45%) and ERP (38%) are important types to integrate with others especially in areas such as sales and customer service. Apple’s recent announcement of a new SDK, should facilitate process integration between software systems so that, for example, users can access and navigate applications such as those from Box and Roambi and transactional applications such as CRM and ERP in a single workflow. This capability can provide further usability advantages for Roambi, which scored the highest rating in this area in our Mobile Business Intelligence Value Index.

Roambi announced its mobile BI support for the Google Android mobile operating system that operates across a wide range of those smartphone and tablet technologies. It had delayed its development of its software on the Android platform, which required significant development resources and investment but was part of its strategy to maximize its business potential and relationship with Apple. The release are available at the Google Play store . The initial version will include four of Roambi’s most popular views: Card, Catalist, Layers and Superlist. Similar to its application for the Apple platform, security features for Android include Device Lockout, Remote Wipe and Application Passcode. Integration with Roambi’s partner Okta provides identity management services and gives access to any applications supported by Okta. Integration includes Active Directory (AD) and lightweight directory access protocol (LDAP). While Roambi Flow will not be available on Android out of the gate, the company says it will be becoming available by the end of 2014.

Current approaches to mobile business intelligence applications on the market include native, Web-based and hybrid (a combination of both). We compare these approaches in detail in the executive summary of our Mobile Business Intelligence Value Index report.With the new Android support, Roambi has a unique approach to the hybrid architecture that bypasses the browser completely. There is no data cached in a browser and in fact the data is loaded directly to the device and rendered through Roambi natively on the device.  From the user’s perspective, the benefit of this approach is performance since interactivity does not rely on data traveling over a network. A second benefit is offline access to data, which is not available via non-native approaches. From the developer’s or information assembler perspective, testing across browsers is not needed since there is no data caching and the experience is the same regardless of browser in use. 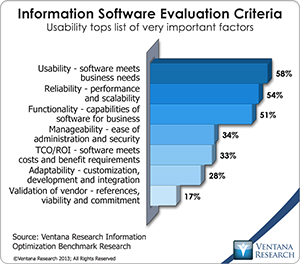 Our next-generation business intelligence research shows that executives strongly support mobile BI: Nearly half of them said that mobility is very important to their BI processes. Executives also favor Apple over Android devices which is likely one of the key reasons for Apple’s dominance in the current business intelligence landscape. However our research shows latent demand for Android devices in the business intelligence market and given the dominance of Android in the consumer market as well as dominance in places like Asia and other emerging markets, any company that seeks to take significant global market share will need support for both platforms. Our information optimization research fond Google Android as second in smartphone platform (24%) behind Apple iPhone (59%) as first ranked position. Therefore, Android support is an important evolution for Roambi in order to address an increasing demand in the market for Android devices.

Usability has become the most important evaluation criteria and in the information optimization benchmark research was selected as most important to over half (58%) of organizations. Roambi ranked as the highest in usability in the Ventana Research Mobile Business Intelligence Value Index, though its overall score was hampered somewhat by the lack of support for Android. With Android support, the company now addresses the need for multiple and the so called bring your own device (BYOD) to work methods now becoming more prevalent and allowed by organizations. By addressing this as well as taking advantages of broader market developments such as the new Apple SDKs, Roambi continues to address what organizations find important today. Usability of business intelligence systems is a top priority for 63% of companies. Even our big data analytics research finds a growing level of overall importance for mobile access in almost half of organizations (46%).  Any company that wants to get a user friendly business intelligence into the hands of its mobile workers quickly and effectively should have Roambi in the consideration set.

Get to Know Enterprise Spreadsheets to Improve Business Effectiveness