SAS Institute, a long-established provider analytics software, showed off its latest technology innovations and product road maps at its recent analyst conference. In a very competitive market, SAS is not standing still, and executives showed progress on the goals introduced at last year’s conference, which I covered. SAS’s Visual Analytics software, integrated with an in-memory analytics engine called LASR, remains the company’s flagship product in its modernized portfolio. CEO Jim Goodnight demonstrated Visual Analytics’ sophisticated integration with statistical capabilities, which is something the company sees as a differentiator going forward. The product already provides automated charting capabilities, forecasting and scenario analysis, and SAS probably has been doing user-experience testing, since the visual interactivity is better than what I saw last year. SAS has put Visual Analytics on a six-month release cadence, which is a fast pace but necessary to keep up with the industry.

Visual discovery alone is becoming an ante in the analytics market, 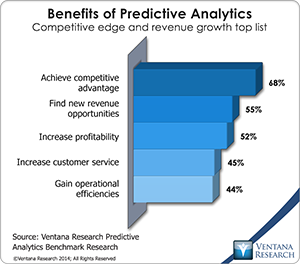 since just about every vendor has some sort of discovery product in its portfolio. For SAS to gain on its competitors, it must make advanced analytic capabilities part of the product. In this regard, Dr. Goodnight demonstrated the software’s visual statistics capabilities, which can switch quickly from visual discovery into regression analysis running multiple models simultaneously and then optimize the best model. The statistical product is scheduled for availability in the second half of this year. With the ability to automatically create multiple models and output summary statistics and model parameters, users can create and optimize models in a more timely fashion, so the information can be come actionable sooner. In our research on predictive analytics, the most participants (68%) cited competitive advantage as a benefit of predictive analytics, and companies that are able to update their models daily or more often, our research also shows, are very satisfied with their predictive analytics tools more often than others are. The ability to create models in an agile and timely manner is valuable for various uses in a range of industries.

There are three ways that SAS allows high performance computing. The first is the more traditional grid approach which distributes processing across multiple nodes. The second is the in-database approach that allows SAS to run as a process inside of the database.

The third is extracting data and running it in-memory. The system has the flexibility to run on different large-scale database types such as MPP as well Hadoop infrastructure through PIG and HIVE. This is important because for 64 percent of organizations, the ability to run predictive analytics on big data is a priority, according to our recently released research on big data analytics. SAS can run via MapReduce or directly access the underlying Hadoop Distributed File System and pull the data into LASR, the SAS in-memory system. SAS works with almost all commercial Hadoop implementations, including Cloudera, Hortonworks, EMC’s Pivotal and IBM’s InfoSphere BigInsights. The ability to put analytical processes into the MapReduce paradigm is compelling as it enables predictive analytics on big data sets in Hadoop, though the immaturity of initiatives such as YARN may relegate the jobs to batch processing for the time being. The flexibility of LASR and the associated portfolio can help organizations overcome the challenge of architectural integration, which is the most widespread technological barrier to predictive analytics (for 55% of participants in that research). Of note is that the SAS approach provides purely analytical engine, and since there is no SQL involved in the algorithms, its overhead related to SQL is non-existent and it runs directly on the supporting system’s resources.

As well as innovating with Visual Analytics and Hadoop, SAS has a clear direction in its road map, intending to integrate the data integration and data quality aspects of the portfolio in a single 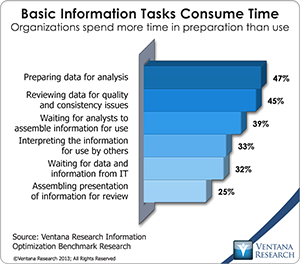 workflow with the Visual Analytics product. Indeed, data preparation is still a key sticking point for organizations. According to our benchmark research on information optimization, time spent in analytic tasks is still consumed most by data preparation (for 47%) and data quality and consistency (45%). The most valuable task, interpretation of the data, ranks fourth at 33 percent of analytics time. This is a big area of opportunity in the market, as reflected by the flurry of funding for data preparation software companies in the fourth quarter of 2013. For further analysis of SAS’s data management and big data efforts, please read my colleague Mark Smith’s analysis.

Established relationships with companies like Teradata and a reinvigorated relationship with SAP position SAS to remain at the heart of enterprise analytic architectures. In particular, the co-development effort that allow the SAS predictive analytic workbench to run on top of SAP HANA is promising, which raises the question of how aggressive SAP will be in advancing its own advanced analytic capabilities on HANA. One area where SAS could learn from SAP is in its developer ecosystem. While SAP has thousands of developers building applications for HANA, SAS could do a better job of providing the tools developers need to extend the SAS platform. SAS has been able to prosper with a walled-garden approach, but the breadth and depth of innovation across the technology and analytics industry puts this type of strategy under pressure.

Overall, SAS impressed me with what it has accomplished in the past year and the direction it is heading in. The broad-based development efforts raise a final question of where the company should focus its resources. Based on its progress in the past year, it seems that a lot has gone into visual analytics, visual statistics, LASR and alignment with the Hadoop ecosystem. In 2014, the company will continue horizontal development, but there is a renewed focus on specific analytic solutions as well. At a minimum, the company has good momentum in retail, fraud and risk management, and manufacturing. I’m encouraged by this industry-centric direction because I think that the industry needs to move away from the technology-oriented V’s toward the business-oriented W’s.

For customers already using SAS, the company’s road map is designed to capture market advantage with minimal disruption to existing environments. In particular, focusing on solutions as well as technological depth and breadth is a viable strategy. While it still may make sense for customers to look around at the innovation occurring in analytics, moving to a new system will often incur high switching costs in productivity as well as money. For companies just starting out with visual discovery or predictive analytics, SAS Visual Analytics provides a good point of entry, and SAS has a vision for more advanced analytics down the road.