Cornerstone Doubles Down on Talent Management

Cornerstone OnDemand is a vendor of cloud-based systems for talent management. In February I covered the launch of its Cornerstone for Salesforce application and its announcement of annual earnings. Cornerstone has approximately 1,300 clients and 11 million users in companies with on average 9,000 employees. The company released its financial results for the first quarter of 2013 in May, showing year-over-year revenue growth of 57 percent, to $37.7million. This is an all-time quarterly high for the company.

I recently attended the analyst day at Cornerstone Convergence 2013, its user conference. The theme was “reimagining work,” which was a reference to their new user interface that is supposed to deliver a more consumer application like experience to customers.  Overall throughout the conference, Cornerstone focused on promoting the value of delivering a best-of-breed global talent management solution. The company is insisting on its specialization in the market at a time when many vendors, such as Workday, SumTotal, SAP SuccessFactors and Oracle Taleo, are going beyond talent management to offer broader platforms for human capital management (HCM).  While Cornerstone has a strong market presence in talent management and plenty of room for growth, I think eventually they will need to broaden beyond talent management to offer core human resources management as well; this will occur because competitors will eventually offer enough value here to make this a necessity to avoid losing business they do not wish to.

Three executives – CEO Adam Miller, Vincent Belliveau, SVP & GM for EMEA, and Frank Ricciardi, VP & GM for APAC – discussed how they intend to execute their parts of this strategy for the year. They spoke of expanding Cornerstone’s direct sales presence in Asia and Europe to compete there with Oracle and SAP. Cornerstone is also expanding its network of integration partners – one of whom, Appirio, is a major integrator for it in the North American market. Presently Cornerstone is implementing approximately one-third of its sales through integration partners and the rest directly through Cornerstone’s own professional services. In Europe part of the strategy is to use the poor economy against large ERP vendors by talking to customers about ROI and moving from expensive ERP systems to its purely cloud-based talent management system. The question looking ahead will be whether Oracle and SAP can compete on price with their cloud-based talent management products or if they opt to maintain the status quo on pricing and sales strategy; the latter would leave to Cornerstone the middle market, which amounts to the majority of Europe.

At this year’s Convergence event, Cornerstone spokespeople demonstrated products and made several announcements meant to further execution of the best-of-breed strategy for talent management. The most significant release at the show was an update to the user interface, which CEO Miller demonstrated. Billed as being like the 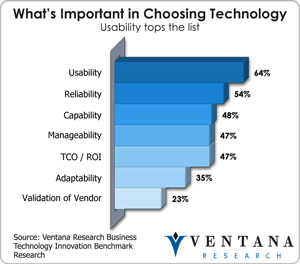 front end to a consumer Internet application, the revised user experience presents a simple set of navigation elements on the screens, reducing the visual complexity compared with previous versions, making the experience easier to consume. Much of the look, feel and way of interacting with the revised interface resembles a Google application, with an embedded predictive search feature; this is something that other application vendors in HCM have adopted as well. In addition, Cornerstone has gotten into gamification with the new feedback section of the Performance application, which allows users who are giving feedback to award “trophies” for things (such as a genius idea) to another employee and which translate into a points system. Currently Cornerstone does not have an application to manage the points system, a hole it will have to fill to make this a viable application; Miller said the company will do that. Overall I expect this revision of the user interface to be well-received by the market, as it incorporates many current consumer-grade elements. I also note that usability is the most important purchase evaluation consideration for participants (chosen by 64%) in our research on business technology innovation. I believe Cornerstone is moving in the right direction to remain competitive in this regard.

In other announcements, Cornerstone released updates to several applications, including Cornerstone Connect, a social networking application. To Cornerstone Connect it has added activity streams, which are visible in each application a customer purchases (such as learning, performance management or recruiting), and the ability to embed and share content with other users from within the 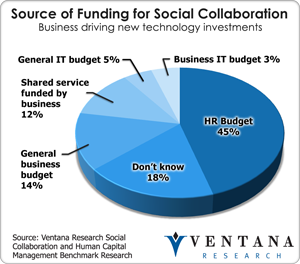 activity stream. But the major change to this application is the addition of collaborative project management functionality.  This is something that, while interesting, may prove to be problematic, as HR traditionally does not own the organization’s project management applications, and there are many successful project management applications on the market today. Cornerstone claims that many of its customers have been asking for this kind of functionality, so time will tell whether there is a true market for this kind of application within the HR buying community. Our benchmark research on social collaboration and human capital management shows that less than half (45%) of the funding for social collaboration projects is coming from HR budgets, and other aspects of the business are driving new technology investments.

Cornerstone also announced updates for Recruiting Cloud, its newest cloud application, to improve its functionality. But several of the updates are already table stakes for any enterprise recruiting system, such as interview management capabilities, integration with a background-check provider, cost tracking for job requisitions and basic social networking capabilities. The most interesting feature in this release is the embedded video interviewing from HireVue; in a recent posting I outlined HireVue’s market-leading capabilities in video interviewing. Only about 10 percent of Cornerstone’s  customers currently use this application, but if they continue to add improvements with differentiating features like this, the number should increase.

Cornerstone also released an updated version of its mobile application with native apps for iOS and Android devices. The mobile application update is effective for its breadth and usability – it offers easy-to-use view and edit features for most of the Cornerstone applications including the core profile, learning, performance and recruiting applications. However, customers want integrated mobile functionality for talent analytics, which this mobile application lacks. Analytics is an area in which Cornerstone generally needs improvement. Presently it has a technology partnership with Visor, which will help customers sync databases to a third-party analytics tool. Other competitors have embedded analytics with robust capabilities along with prebuilt dashboards and performance indicators that can be seen on mobile devices as well.

One of Cornerstone’s partnerships epitomizes both the success of and the issues with its strategy of being strictly a best-of-breed talent management vendor: its relationship with Workday. Here it has both a good partner and a channel to sell its talent management products, some of which Workday does not presently offer, but also a competitor that offers a partial talent management system and a core HRMS. Cornerstone said that it does not plan to build an HRMS itself, but some customers may not want to pay two vendors for something they think one should provide; today’s market has a number of complete HCM platforms.

Overall Cornerstone showed several promising product enhancements and business investments that will keep it competitive in its core market of talent management. The company will face strong competition from vendors of broader solutions in human capital management, but its leaders understand its place in the market; organizations seeking a talent management system in the coming year should evaluate Cornerstone OnDemand.

Technology Puts the ‘A’ Back in FP&A