Microsoft has been steadily pouring money into big data and business intelligence. The company of course owns the most widely used analytical tool in the world, Microsoft Excel, which our benchmark research into Spreadsheets in the Enterprise shows is not going away soon. User resistance (cited by 56% of participants) and lack of a business case (50%) are the most common reasons that spreadsheets are not being replaced in the enterprise.  The challenge is ensuring the spreadsheets are not just personally used but connected and secured into the enterprise for a range of consistency and potential errors that all add up to more work and maintenance as my colleague has pointed out recently. 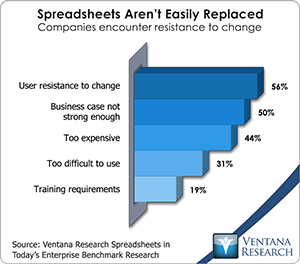 Along with Microsoft SQL and SharePoint, Excel is at the heart of the company’s BI strategy. In particular, PowerPivot, originally introduced as an add-on for Excel 2010 and built into Excel 2013, is a discovery tool that enables exploratory analytics and data mashups. PowerPivot uses an in-memory, column store approach similar to other tools in the market. Its ability to access multiple data sources including from third parties and government through Microsoft’s Azure Marketplace, enables a robust analytical experience.

Ultimately, information sources are more important than the tool sets used on them. With the Azure Marketplace and access to other new data sources such as Hadoop through partnership with Hortonworks as my colleague assessed, Microsoft is advancing in the big data space. Microsoft has partnered with Hortonworks to bring Hadoop data into the fold through HDInsights, which enable familiar Excel environments to access HDFS via HCatalog. This approach is similar to access methods utilized by other companies, including Teradata which I wrote about last week. Microsoft stresses the 100 percent open source nature of the Hortonworks approach as a standard alternative to the multiple, more proprietary Hadoop distributions occurring throughout the industry. An important benefit for enterprises with Microsoft deployments is that Microsoft Active Directory adds security to HDInsights.

As my colleague Mark Smith recently pointed out about data discovery methods, the analytic discovery category is broad and includes visualization approaches. On the visualization side, Microsoft markets PowerView, also part of Excel 2013, which provides visual analytics and navigation on top of the Microsoft’s BI semantic model. Users also can annotate and highlight content and then embed it directly into PowerPoint presentations. This direct export feature is valuable because PowerPoint is still a critical communication vehicle in many organizations. Another visual tool, currently in preview, is the Excel add-in GeoFlow, which uses Bing Maps to render visually impressive temporal and geographic data in three dimensions. Such a 3-D visualization technique could be useful in many industries.  Our research into next generation business intelligence found that deploying geographic maps (47%) and visualizing metrics on them (41%) are becoming increasing important but Microsoft will need to further exploit location-based analytics and the need for interactivity.

Microsoft has a core advantage in being able to link its front-office tools such as Excel with its back-end systems such as SQL Server 2012 and SharePoint. In particular, having the ability to leverage a common semantic model through Microsoft Analytical Services, in what Microsoft calls its Business Intelligence Semantic Model, users can set up a dynamic exploratory environment through Excel. Once users or analysts have developed a BI work product, they can publish the work product such as a report directly or through SharePoint. This integration enables business users to share data models and solutions and manage them in common, which applies to security controls as well as giving visibility into usage statistics to see when particular applications are gaining traction with organizational users.

Usability, which our benchmark research into next-generation business intelligence 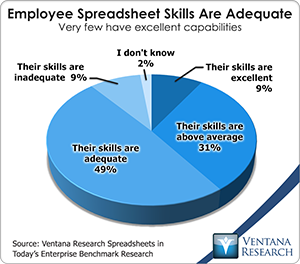 identifies as the number-one evaluation criterion in nearly two-thirds (64%) of organizations, is still a challenge for Microsoft. Excel power users will appreciate the solid capabilities of PowerPivot, but more casual users of Excel – the majority of business people – do not understand how to build pivot tables or formulas. Our research shows that only 11 percent of Excel users are power users and most skill levels are simply adequate (49%) compared to above average or excellent. While PowerView does give some added capability, a number of other vendors of visual discovery products like Tableau have focused on user experience from the ground up, so it is clear that Microsoft needs to address this shortcoming in its design environment.

When we consider more advanced analytic strategies and inclusion of advanced algorithms, Microsoft’s direction is not clear. Its Data Analysis eXpressions (DAX) can help create custom measures and calculated fields, but it is a scripting language akin to MDX. This is useful for IT professionals who are familiar with such tools, but here also business-oriented users will be challenged in using it effectively.

A wild card in Microsoft’s BI and analytics strategy is with mobile technology. Currently, Microsoft is pursuing a build-once, deploy-anywhere model based on HTML5, and is a key member of the Worldwide Web Consortium (W3C) that is defining the standard. The HTML5 standard, which has just passed a big hurdle in terms of candidate recommendation is beginning to show value in the design of new applications that can be access through web-browsers on smartphones and tablets. However, the success or failure of its Windows 8-based Surface tablet will be the real barometer since its integration with the Office franchise is a key differentiator. This approach of HTML5 could be challenging as our technology innovation research into mobile technology finds more organizations (39%) prefer native mobile applications from the vendors specific application stores compared to 33 percent through web-browser based method and a fifth with no preference. Early adoption of the tablet has not been strong, but Microsoft is said to be doubling down with a new version to be announced shortly. Success would put Office into the hands of the mobile workforce on a widespread basis via Microsoft devices, which could have far-reaching impacts for the mobile BI market.

As it stands now, however, Microsoft faces an uphill battle in establishing its mobile platform in a market dominated by Android and Apple iOS devices like the iPhone and iPad. If the Surface ultimately fails, Microsoft will likely have to open up Office to run on Android and iOS or risk losing its dominant position.  My colleague is quite pessimistic about Microsoft overall mobile technology efforts and its ability to overcome the reality of the existing market. Our technology innovation research into mobile technology finds that over half of organizations have a preference for their smartphone and tablet technology platform, and the first ranked smartphone priorities has Apple (50%), Android (27%) and RIM (17%) as top smartphone platforms with Microsoft a distant fourth (5%); for tablets is Apple (66%), Android (19%) and then Microsoft (8%). Based on these finding, Microsoft faces challenges on both the platform front and if they adapt their technology to support others that are more preferred and used in business today.

Ultimately, Microsoft is trying to pull together different initiatives across multiple internal business units that are known for being very siloed and not organized well for customers.  Ultimately, Microsoft has relied on its channel partners and customers to figure out how to not just make them work together but also think about what is possible since they are not always given clear guidance from Redmond. Recent efforts find that Microsoft is trying to come together to address the big data and business analytics challenge and the massive opportunity it represents. One area in which this is coming together is Microsoft’s cloud initiatives. Last year’s announcements of Azure virtual machines enables an infrastructure-as-a-service (IaaS) play for Microsoft and positions Windows Azure SQL Database as a service. This could make the back end systems I’ve discussed available through a cloud-based. Ironically, the cloud-based Office365 suite does not include core productivity applications such as Excel and PowerPoint, so front-end access will still come through the client version of the software.

For organizations that already have installed Microsoft as their primary BI platform and are looking for tight integration with an Excel-based discovery environment, the decision to move forward is relatively simple. The trade-off is that this package is still a bit IT-centric and may not attract as many in the larger body of business users as a more user-friendly discovery product might do and address the failings of business intelligence. Furthermore, since Microsoft is not as engaged in direct support and service as other players in this market, it will need to move the traditionally technology focused channel to help their customers become more business savvy. For marketing and other business departments, especially in high-velocity industries where usability and time-to-value is at a premium and back-end integration is secondary, other tools will be worth a look. Microsoft has great potential and with analytics being the top ranked technology innovation priority among its customers I hope that the many divisions inside the global software giant can finally come together to deliver a comprehensive approach.