SAP just released strong preliminary quarterly and annual revenue growth, which in many ways can be attributed to a strong strategic vision around the HANA in-memory platform and strong execution throughout the organization. Akin to flying an airplane while simultaneously fixing it, SAP’s bold move to HANA may at some point see the company continuing to fly when other companies are forced to ground parts of their fleets.

Stepping into 2012, the HANA strategy was still nascent, and SAP provided incentives both to customers and the channel to bring them along. At that point SAP also promoted John Schweitzer to senior vice president and general manager for business analytics.  Schweitzer, an industry veteran who spent his career with Hyperion and Oracle before moving to SAP in 2010, gave a compelling analytics talk at SAPPHIRE NOW in early 2012 and was at the helm for the significant product launches during the course of the year.

One of these products is SAP’s Visual Intelligence, which was released in the spring of 2012. The product takes Business Objects 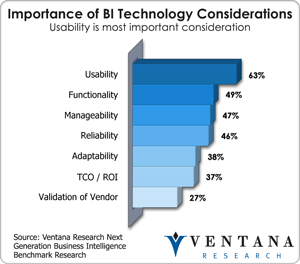 Business Explorer and moves it to the desktop so that analysts can work without the need to have IT involved. Because it runs on HANA, it allows real-time visual exploration of data akin to what we have been seeing with companies such as Tableau, which recently passed the $100 million mark in revenue.  As with many of SAP’s new offers, the advantage of running on top of HANA allows visual exploration analysis on very large data sets. The same size data sets may quickly overwhelm certain “in-memory” competitor systems. In order to facilitate buzz and help develop “Visi,” as Visual Intelligence is also called, the company ran a Data Geek Challenge in which SAP encouraged users to develop big data visualizations on top of HANA.

Tools such as SAP’s Visual Intelligence begin to address the analytics usability challenge that I recently wrote about in the The Brave New World of Business Intelligence which focused on recent research we did on next-generation business intelligence. One key takeaway from that research is that usability expectations for business intelligence are being set on a consumer level, but that our information environments and our processes in the enterprise are too fragmented to achieve the same level of usability, resulting in relatively high dissatisfaction with next-generation business tools. Despite that dissatisfaction, the high switch costs for enterprise BI mean that customers are essentially captive, and this gives incumbents time to adapt their approaches. There is no doubt that SAP looks to capitalize on this opportunity with agile development approaches and frequent iterations of the Visual Intelligence software.

Another key release in 2012 was around Predictive Analytics which went generally available late in the year after SAP TechEd in Madrid. With this release, SAP moves away from its partnership

with IBM SPSS. The move makes sense given that sticking with SPSS would have resulted in a critical dependency for SAP. According to our benchmark research on Predictive Analytics, 68% of organizations see predictive analytics as a source of competitive advantage. Once again, HANA may prove to be a strong differentiator for SAP in that the company will be able to leverage the in-memory system to visualize data and run predictive analytics on very large data sets and across different workloads. Furthermore, the sap Predictive Analytics offering inherits data acquisition and data manipulation functionality from SAP Visual Intelligence. However, it cannot be installed on the same machine as Visi, according to a blog on the SAP Community Network.

SAP will need to work hard to build out predictive analytics capabilities to compete with the likes of SAS, IBM SPSS and other providers which have years of custom developed vertical and Line-of-Business solution sets. Beyond the customized analytical assets, IBM and SAS will likely promote the idea of commodity models as such non-optimized modeling approaches become more important. Commodity models are a breed of “good enough” models that allow for prediction and data reduction that is a step-function better than a purely random or uninformed decision. Where deep analytical skill sets are not available, sophisticated software can run through data and match it to the appropriate model.

In 2012, SAP also continued to develop targeted analytical solutions, which bundles SAP BI and the Sybase IQ server, a columnar database. Column-oriented databases such as Sybase IQ, Vertica, ParAccel and Infobright have gained momentum over the last few years by providing a platform that organizes data in a way that allows for much easier analytical access and data compression.  Instead of writing to disk in a row oriented fashion, columnar approaches write to disk in a column oriented fashion allowing for faster analytical cycles and reduced Time-to-Value.

The competitive advantage of columnar databases, however, may be mitigated as in-memory approaches gain favor in the marketplace. For this reason, continued development on the Sybase IQ platform may be an intermediate step until the HANA analytics portfolio is built out; after which HANA will likely cannibalize parts of its own stack. SAP’s dual approach to Big Data analytics with both “in-memory” and columnar provides good visibility into the classic Innovator’s Dilemma that faces many technology suppliers today and how SAP is dealing with this dilemma. It should be noted, however, that SAP is also working on an integrated portfolio approach and that Sybase IQ may actually be a better fit as datasets move to Petabyte scale.

Another aspect of that same Innovator’s Dilemma is a fragmented choice environment as new technologies develop. Our research shows that the market is undecided on how it will roll out critical next-generation business intelligence capabilities such as collaboration. Just under two-fifth of our Next Generation 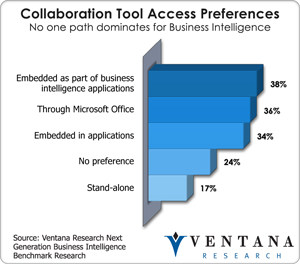 Business Intelligence study participants (38%) prefer business intelligence applications as the primary access method for collaborative BI, but 36 percent prefer access through office productivity tools, and 34 percent prefer access through applications themselves. (Not surprisingly, IT leans more toward providing tools within the already existing landscape, while business users are more likely to want this capability within the context of the application.)  This fragmented choice scenario carries over to analytics as well, where spreadsheets are still the dominant analytical tool in most organizations. Here at Ventana Research, we are fielding more inquiries on application-embedded analytics and how these will play out in the organizational landscape. I anticipate this debate will continue through 2013, with different parts of the market providing solid arguments for each of the three camps. Since HANA uniquely provides both transactional processing and analytic processing in one engine, it will be interesting to look closer at the HANA and Business Objects roadmap in 2013 to see how they are positioning with respect to this debate. Furthermore, as I discuss in my 2013 Research Agenda blog post, disseminating insights within the organization is a big part of moving from insights to action, and business intelligence is still the primary vehicle for moving insight into the organization.  For this reason, the natural path for many organizations may indeed be through their Business Intelligence systems.

SAP has competitive environment and are challenging HANA as well as its BI offering with alternative approaches to big data analytics and how to have most efficient business analytics offering. SAP, clearly separating its strategic position, looks to continue to innovate its entire portfolio, including both applications and analytics, based on HANA. In the most recent quarter, SAP took a big step forward in this regard by porting its entire business suite to run on HANA as my colleague Robert Kugel discussed in a recent blog.

While there are still some critical battles to be played out, one thing remains clear: SAP is one of the dominant players in business intelligence today. Our Value Index on Business Intelligence has assessed SAP as a Hot Vendor and is top ranked. SAP aims to stay that way by continuing to innovate around HANA and giving its customers and prospects a seamless transition to next-generation analytics and technologies.

AI for Sales: Technology is Ready but Are You?