The need for data-driven decision-making requires organizations to transform not only the approach to business intelligence and data science but also accelerate the development of new operational applications that support greater business agility, enable cloud- and mobile-based consumption, and deliver more interactive and personalized experiences. To stay competitive, organizations need to prioritize the development of new, data-driven applications. As a result, many have been encouraged to invest in new data platforms designed to support agile development and cloud-based delivery. This is one of the factors driving the growth of MongoDB, and continues to drive the evolution of its document database into what is now described as a cloud-based application data platform.

MongoDB is one of the most prominent data platform vendors to have emerged from the NoSQL category, which is characterized by flexible schema, distributed data processing and the use of non-relational data models (key value, document, graph). Almost one-quarter (22%) of respondents to Ventana Research’s Analytics and Data Benchmark Research are using NoSQL databases in production today, with a further 21% planning to do so within two years. Founded in 2007, MongoDB has been able to tap into developer enthusiasm for NoSQL, driving widespread adoption of its document database, and riding the wave of developer-led adoption to become the first NoSQL vendor to launch an initial public offering in 2017. MongoDB was also early to respond to customer demand for cloud-based database services, launching the MongoDB Atlas managed service in 2016 to complement its MongoDB Enterprise offering for self-managed deployment on-premises or in the cloud. The company also extended its reach to mobile and edge devices in 2019 with the MongoDB Realm mobile database, featuring synchronization with Atlas. 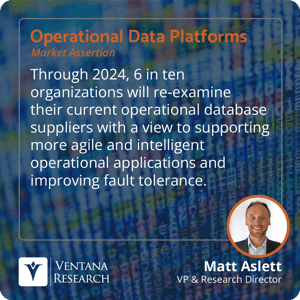 As we recently described, operational data platforms are designed to store, manage and process data to support worker-, customer- and partner-facing operational applications across on-premises, hybrid and multi-cloud environments. Given the overall dominance of the relational data model in recent decades, the databases used to support operational workloads have historically been relational databases. However, document databases are particularly attractive to developers, thanks to the flexible nature of the document model, which does not require strict database schema to be enforced when data is written to disk, and enables the data model to evolve as application requirements change. This makes document databases particularly suitable for agile development and business transformation projects. Additionally, MongoDB has added multiple features over the years — such as support for distributed multi-document ACID (atomic, consistent, isolated, and durable) transactions — that make its database more suitable for workloads that were previously the preserve of relational databases. We assert that through 2024, 6 in ten organizations will re-examine current operational database suppliers with a view to supporting more agile and intelligent operational applications and improving fault tolerance.

MongoDB Atlas has rapidly become the company’s flagship offering, accounting for more than half of MongoDB’s total revenue in its second and third quarters of fiscal 2022. The success of MongoDB Atlas is driven by customer demand for cloud-based managed services, but has also been accelerated by MongoDB’s tactic of delivering functionality that is only available via Atlas as well as switching to a more rapid development and release cadence that sees new features commercially supported in Atlas prior to being considered production-ready with MongoDB Enterprise. Starting with version 5.1, launched in November 2021, the company is now delivering point versions on a quarterly basis. The first of these, version 5.1, included new capabilities such as native time series enhancements, cross-shard joins and enhanced security. Although these capabilities are available for Atlas as well MongoDB Enterprise and the free MongoDB Community, they are only supported for production deployment on Atlas. Outside of Atlas the quarterly rapid releases are considered development builds to be used for evaluation only ahead of being supported in production by MongoDB with the release of 6.0 (expected to be generally available in mid-2022).

Additionally, several MongoDB database features are only available with Atlas, including data replication across multiple clouds as well as Atlas Search, Atlas Data Lake and Atlas Charts. Atlas Search offers full-text search capabilities for the MongoDB document model and is based on the open-source Apache Lucene search engine library. Atlas Data Lake is MongoDB’s offering for querying data stored in Amazon Web Services’ S3 cloud storage service. In addition to federated querying of data in Atlas and S3, Atlas Data Lake is also used by customers to support tiered storage approaches for large data volumes as well as two-step approaches to transformation and operationalization. Atlas Charts is the company’s offering for creating, sharing and embedding visualizations based on data in Atlas and Atlas Data Lake for real-time business intelligence based on real-time aggregation pipelines. Although Atlas Data Lake and Atlas Charts are both focused on data querying and analysis, MongoDB is predominantly used as an operational data platform, rather than an analytic platform. Atlas Charts enables the creation of operational applications with embedded data visualization to serve the need for accelerated data-driven decision-making.

Continued growth in the use of MongoDB in general — and MongoDB Atlas in particular — can be expected based on the ongoing adoption of both non-relational databases as well as cloud data platforms for operational workloads. Additionally, while MongoDB is unlikely to position its offerings as analytics data platforms, the company is expected to add additional features to enable the analysis and visualization of data stored and processed with Atlas. Given the additional features available with Atlas, the cloud-based application data platform is now a potential alternative for multiple workloads that were once considered unsuitable for NoSQL databases. I recommend that organizations evaluating potential database providers for new operational applications consider MongoDB, and also that any would-be adopters take care to familiarize themselves with which features are only available or commercially supported via Atlas.