As with many IT innovations, augmented reality (AR), extended reality (XR) and the related topic of spatial computing had been discussed to death long before they became a practical reality. As a user interface, AR is already well understood in terms of its ability to open vast new vistas in entertainment as well as making physical tasks, such as machinery maintenance and warehouse pick-and-pack, far more efficient. In the case of spatial computing, by using glasses to superimpose workflow directions, instructional videos, messages and the like onto the three-dimensional world, individuals can complete tasks faster with little formal training and make fewer errors in the process. So, long before these AR devices, tools and their related UI techniques are adapted to create a new era of immersive business computing, here are some thoughts on this idea.

A less explored topic in the field of AR is the potential for fostering a significant improvement in the efficiency of business computing and enhancing the effectiveness and value of business processes. This is not surprising since the topic of how AR can affect ordinary work life hardly quickens the pulse. A new “metaverse,” 3D gaming and whiz-bang eye candy are far more engaging topics compared to, say, using AR in accounts receivable. Because of this, the impact of AR on business execution and performance is seriously underestimated. Weaving AR fully into business software will take time but we assert that by 2027, all major business applications will offer some level of AR functionality to substantially improve efficiency and effectiveness. 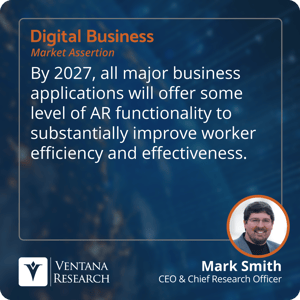 Until now, a major obstacle to applying AR to business computing has been the lack of a suitable visualization device appropriate for white collar work. Today’s goggles are similar to “luggable computers,” which were remarkable by early standards but too heavy and cumbersome to be practical for wide adoption (the popular Compaq weighed 28 pounds). People remained chained to their desktops until multiple breakthroughs were achieved in a wide range of components (including displays, processors, memory and batteries) that made a laptop feasible and affordable. Further advances in these areas and networks have made even smaller devices used in mobile computing workable, which has had a profound impact on how and where work is performed. The same progression is likely to happen with wearable devices. As a first step, a sleek, powerful and lightweight wearable visualization device from Apple that promises to meet this need is reported to be nearing release. This and similar devices will make a new era of business computing possible because they will expand the current boundaries of UI design to make a richer, more flexible and more personalized experience achievable. A metaverse of business computing is now conceivable, one that molds itself to the individual rather than requiring the individual to adapt to technology-imposed constraints.

Today’s graphical user interface (GUI), now practically taken for granted, is one of the pillars of modern business application design, along with event-driven programming and relational and other database technologies that first emerged by the early 1990s. Combined with a shift away from dumb terminals connected to a mainframe, client-server computing enabled the design of a new generation of applications that, compared to earlier software, were more flexible, more efficient in performing tasks, and better aligned with how organizations work. The richer UI and ability to multitask made working with business software faster and easier compared to the text-based UI it replaced. Here, too, improvements in the design and cost of computing hardware were essential to achieving this breakthrough. We are on the verge of a similar, major step forward in GUIs that will transform business computing once again.

The use of a wearable device for business computing has the potential to make major improvements in personal productivity and collaborative processes as well as alter how work is performed. The main reason is that the field of vision that is observable with a wearable device is substantially bigger than any existing computing device. In the early 1990s, screen resolution was typically 800 x 600 pixels which meant that, in effect, users were peering through a keyhole into their computing environment. Today, even with high-definition screens, users are looking through a comparative knothole (albeit a large one) compared to what is possible with a wearable device.

And in the realm of possibilities, what is easily imagined is a computing environment where a user can move their head side to side and up and down to keep many more windows visible and within easy viewing compared to a physical screen. (A window is a distinct viewing area in a computing system that allows multiple viewing areas as part of a GUI.) The windows contain all types of information that can be displayed today but, crucially, can also display items in 3D, including charts and images because the device can present images stereoscopically. A video chat where “share my screen” is almost infinitely flexible for displaying documents, charts, tables and annotations becomes feasible.

New motions and visual syntax developed for navigating the metaverse will likely spill over into immersive business computing. Swiping, pointing, “touching,” “tapping “ and other gestures will evolve to simplify manipulating windows and objects within windows. Natural language processing, already well advanced in today’s computing environments, will be a necessity for navigating and collaborating. As such, for many use cases, a screen and keyboard will not be necessary, meaning that a device size of a smart phone – or even the phone itself – will obviate the need for the laptop or tablet. Road warriors will be able to work in cramped coach seats with a lighter load and without concern that someone is looking at their screen.

There is significant potential for technology to radically change business computing user interfaces, but until there are real devices capable of doing what I have described here these ideas will be out of reach. And no matter how sleek, the cost (currently forecast to be about USD 1,000) and limitations of the coming generation of wearable visualization devices will initially constrain the scope of what is practical and therefore hold back adoption. However, the direction of this technology is clear: The business computing metaverse is right around the corner and it will disrupt how tasks and processes are performed. If they have not already, business software vendors will need to begin to study gaming and other AR to rethink how individuals can work in this new environment and best evolve from today’s practices. Vendors will also have to evolve their development efforts and ensure that they have the right software and UI development skills to transform today’s flat computing environment to one that is wider, deeper and richer than anything possible today.