Jaspersoft Business Intelligence Suite competes in the open source and broader BI market. Its customer base is mostly in the small and midsized business and OEMs and SaaS providers who can embed Jaspersoft code directly into their offerings. Earlier this summer, the company introduced Jaspersoft 4.7, which features advancements in interactive reporting, big data access and mobile business intelligence for Android. The 4.7 release brings interactive features such as segmenting and filtering, though these are not as user-friendly as those found in some of the other tools in the market. As many of our benchmark research reports show, usability is becoming more important in the tools environment as business users become more proactive in the selection and use of these tools. Interactive reporting is quickly becoming table stakes, but we’re still not seeing the advancements that will lead to mass business user adoption, as my colleague Mark Smith  recently noted. 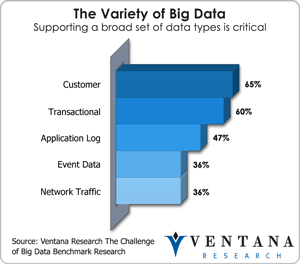 NoSQL database. Users can now display log data directly on a dashboard, and developers can build reports.  This addition augments Jaspersoft’s native access to other big-data NoSQL approaches such as Hadoop and Cassandra. Jaspersoft also partners with big-data companies including IBM Netezza, Datastax, HP Vertica, 10Gen and Google BigQuery. The importance of connecting with a variety of data sources is highlighted by our recent big data benchmark research, where companies say customer data (68%) and transactional data (60%) top the list of critical data sources.

Release 4.7 lets users build applications and view reports natively on Android mobile devices, adding to the native support already available for Apple iOS. An SDK for Android allows developers to embed directly at the device level. I went ahead and tried out the mobile version on my Apple iPhone 4S and found that it lacked the auto-sizing and interactivity found in other approaches today.

I also decided to test out the trial version of the cloud version of the software and I was advised that it would take an hour to provision the resources. While I waited I went ahead and downloaded the 64-bit version of Jaspersoft 4.7 for Windows. The install process was relatively seamless with the only challenge being that there was no clear user name and password available. Fortunately, there was a live operator for me to call and resolve the issue immediately. The trial included sample data to play with which was nice, but the tool really lacked many of the features such as search and collaboration that we are seeing from other available tools in the market. I can see how Jaspersoft may be a nice addition to a SaaS offering or for OEM, but as far as a standalone BI tool, Jaspersoft has an uphill climb. When the cloud version arrived as promised, the demo was essentially the same with minor hang times as opposed to the download version.

While Jaspersoft 4.7 helps move the needle in the right direction, I’d like to see further development in ease of use (especially in the mobile area) as well as in areas such search and collaboration. As our NextGen BI benchmark research will reveal, expectations for mobile and collaborative BI systems are high, but actual time-to-value is still wanting. Overall, however, the ability to embed Jaspersoft in OEM applications along with the rise in cloud computing and SaaS should give the company ample space for growth, and the advancements in the latest release in reporting, big data and mobile areas should help it take advantage of the hottest trends. Companies looking for a low cost BI option or looking to embed basic BI functionality into their own applications should consider Jaspersoft.